For more than 60 years, Galvan Industries has provided the ultimate in corrosion control to steel fabricators and manufacturers throughout the Southeast. Founded in 1958, Galvan was the first hot dip galvanizing operation in the Carolinas.

Keeping pace with increasing customer demand has meant regular investments in facilities and equipment, but at Galvan, we’ve taken the necessary steps to become – and remain – the largest capacity contract galvanizer in the Southeast.

Originally founded in 1958, Galvan was acquired by Charles and Clarence Willard as a subsidiary of Willard Industries in 1960. Willard Industries was a lead smelter and specialty fabricator located in Charlotte and the acquisition made good business sense due to the demand for zinc coatings and lead fabrications. The original plant was equipped with a 10′ x 3′ x 4′ kettle and was suitable only for relatively small parts.

In the early 60’s the kettle capacity was expanded to 27′ in length to facilitate larger fabrications and structural steel. As demand for galvanized products increased the kettle was again lengthened in the early 70’s to 32′.

These recent changes have allowed Galvan Industries to remain the largest capacity job shop galvanizer in the Southeast. Our objective is to provide steel fabricators and manufacturers with high quality, fast delivery and personal service for their galvanizing requirements.

We’re the largest capacity contract galvanizer in the Southeast.

From quality controls to pick-up and delivery, we bring it!

Our team brings decades of knowledge to your job.

Customer satisfaction is our #1 goal every day. 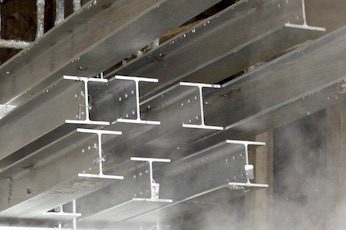